Marketing & Sales Explained (by an Engineer) 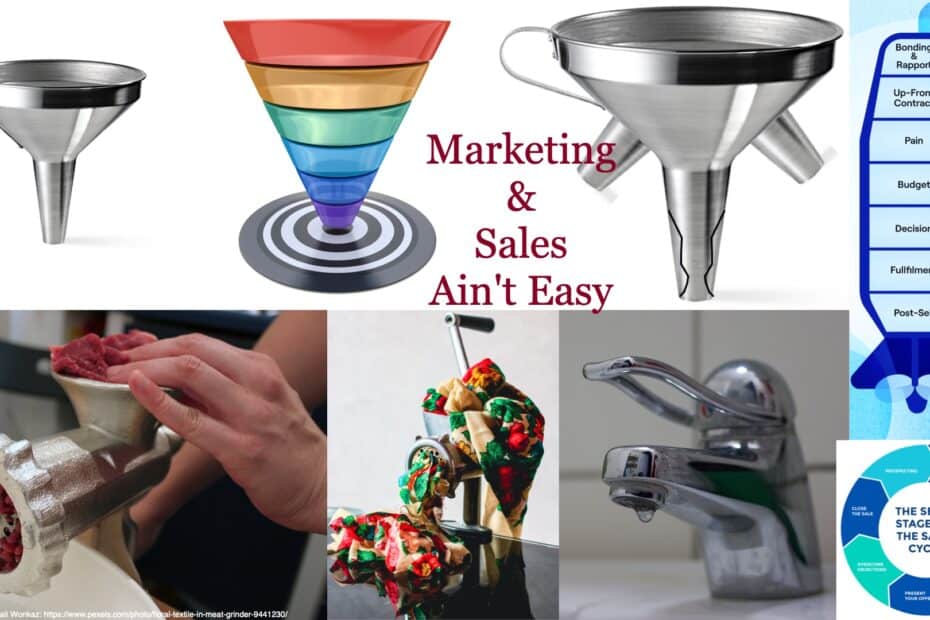 Let me explain the picture. We often hear that we need a marketing and sales funnel. The big part at the top may be the responsibility of the marketing people to interrupt the normally scheduled activity of people and get them to engage. Then others take over and further educate the client, building trust, making an offer and closing the deal. So a nice funnel like the top left is the picture I had in my mind for a funnel. Everything going in the top eventually comes out the bottom. That is if you don’t put too much liquid in at one time that it overflows the top of the funnel and the customers spill out all over the place, probably going to a competitor.

So, you need to have some specific steps along the way to keep the interest of the customer. And, it needs to be a target or an ideal customer. That gives me the second picture of the colorful, stylized funnel with a target at the bottom. Sounds easy doesn’t it?

Along the way, I learned about the Sandler Submarine and the need to keep people compartmentalized and not let them back track. Sorry for putting the submarine on a steep ascent. It fit the frame better and also shows the process from top to bottom, sort of like the funnel. Again, it’s not easy. You may get part way through the submarine only to have someone leave and a sub be put in place. Try as you might to seal those compartments, you may have to go back to the start.

I like the number 7 since it is used throughout the Bible and has some significance for perfection. Though, it is a bit of an odd duck as a prime number. The lower right shows a common 7-step process or cycle for sales. Whether you put it into a circle, picture it as a submarine with compartments with hatches that close, or a colorful funnel with levels, it seems to be pretty much the same. EXCEPT.

The third picture on the top, the funky looking funnel, is a bit more of what I see in the process. Not only can things go wrong if you pour liquid in the top too fast and it pours out over the side, the liquid can disappear in other ways. Some customers just disappear after getting them part way down the funnel. I hear about people ghosting a sales person as they no longer respond to inquiries. Even as you get close to the bottom of the funnel, cracks can appear that let the customer out or change the terms of the deal. I call it a leaky funnel process.

Then, there’s the faucet. Some people are not ready to take the bobsled ride to the bottom of the funnel. They need to be nurtured in some way through a drip campaign. It used to be that most sales people gave up after 2-3 tries, but customers needed about 5 contacts to close a deal. Today, with social media and much more going on, some say it’s 13 contacts while others will put it well over 20. Given the number of times I see the same commercial, it could be a whole lot bigger number of contacts for that drip campaign.

The bottom left is the sausage grinder. The saying goes you don’t want to know how the sausage is made. It’s a lot of hard work and grinding to get the customer to accept the product. It does not just flow down under gravity like the funnel. You may need to push it down at times and clean the screw and the plate.

And, it can get really messy like the grinder trying to chop up a towel. I’m sure there is a child or two out there that tried to put something into a meat grinder that was not meant to be there. Or a sales person that tried a different way that turned out to be so much harder than it needed to be. Maybe, like the towel, they started with the wrong customer.

Marketing & Sales Ain’t Easy. It’s hard work. Sometimes it’s a grind. Sometimes you’ll feel like the deal is sinking or it’s not moving fast enough as it just drips along. Some people are naturally good at all this. But, all of us can learn the process and grind through the steps. Trust me. We all can do it. We all are sales people at some level. Even if its training a dog to go outside.